Gică Hagi, vehement speech to the national team: "We can neither joke nor smile!" What displeased him

Tragedy in Kavala: What was written in the note of the suicide bomber

by HAVANNEWS
in Entertainment, Hot
Reading Time: 5 mins read
A A
0
0
SHARES
7
VIEWS
Share on FacebookShare on Twitter
ADVERTISEMENT

“Frozen” is the village of Lekani Kavala after the double murder of 31-year-old Anna and her only 10-month-old son by her 56-year-old ex-partner and father of her child, who, after killing them, committed suicide.

Euclides Kalogeridis, who runs a cafe in the Kavala Basin and was a family friend of the couple, spoke to ANT1 and claimed that there was tension in the 56-year-old’s relationship with his estranged and 25 years younger partner, focusing on their separation and the fate of the child .

After a legal dispute over the custody of the few-month-old child and while the decision seemed to lean in favor of the mother, the man, who according to his friend had recently lost a lot of weight and appeared stressed and troubled, decided to kill his child and the woman with whom he was born together and then to end his life.

In fact, as he said, a handwritten note was found in the 56-year-old’s home that said “this is where our love begins and this is where it ends.”

The note, according to a report by the television station, was found on a table.

In it he did not write the reasons that led him to his heinous acts, but he described what he lived there with the woman who eventually took her life.

Among other things, he said that: “in this room I met Anna, in this room we fell in love and exchanged our first kiss.”

Today at noon, the autopsy that will be performed at the forensic service of Komotini on the bodies of the unfortunate mother and the infant is expected to be completed, at a time when the details revealed about the double murder are shocking and appalling.

Kill the baby first and then the mother

According to information from protothema.gr, the conclusions of the medical examiner who performed an autopsy at the scene of the crime, reveal that the 56-year-old livestock farmer first killed the 10-month-old infant and seconds later his ex-partner. His death was instantaneous, as was his own when he decided to point the rifle at his own head. A little earlier and after he had killed mother and son, he had called his first cousin who was nearby and told him cynically “come to the stable”.

“He called me at 09.30 and told me two, three times “come to the fold”. Before he took me I heard two shots from the next corral I was in and I thought they were hunters. As soon as I started, I heard a third shot,” he describes speaking to protothema.gr, emphasizing that the sight he witnessed as soon as he arrived at the stable was horrifying. 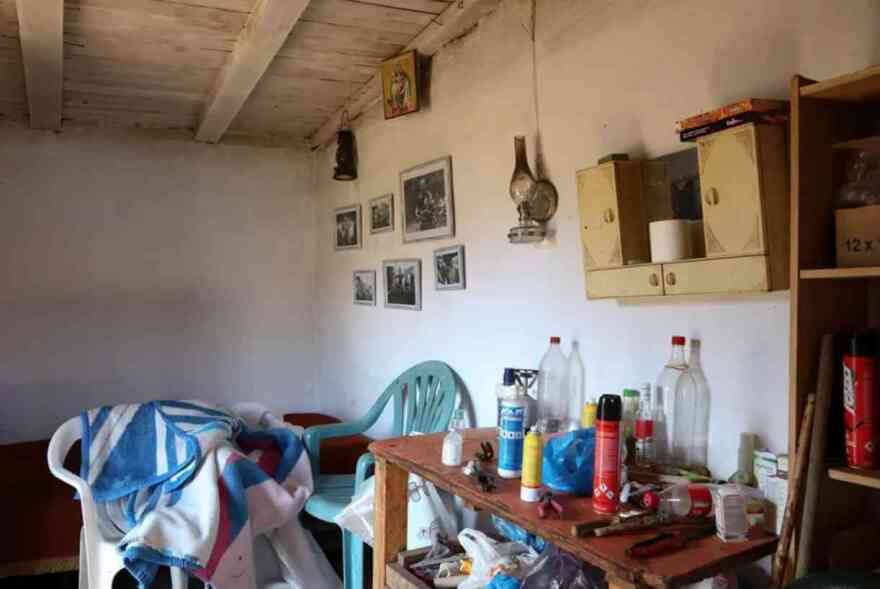 “When I arrived I found all three of them dead, outside the little room. The head (s.s. of the breeder) had been disintegrated. The baby was dead next to his mom,” he says. As his wife, Mrs. Irene, says, the day before the murder, the unfortunate Anna was at home with the child and nothing predicted what would follow. “The baby was the most smiley in the world and Anna the best child and always with a smile,” he says. “Only when this child looked at you were you happy,” she says and bursts into tears, unable to believe what happened.

The last act of the drama is expected to be written at the funeral of the infant and his mother which, according to information, will take place in Germany, following the request of the unfortunate 31-year-old.

The perpetrator’s threats before the murder

“I will kill you and the child and I will kill myself” the perpetrator had said to his 31-year-old ex-partner, shortly before he made his threat a reality, murdering her and their few-month-old child and then pointing the carbine at his head.

The information about the double murder that occurred on Friday morning in the village of Lekani in Kavala is appalling. The unfortunate woman, just before 9 in the morning when the perpetrator arrived outside the house where she lived with her close relatives and asked her to follow her to the corral with the infant, had told her neighbor and friend to call her in an hour later. Apparently, as her neighbor tells protothema.gr, she was afraid of something.

“Anna followed him because she didn’t expect him to do this and he had threatened her in the past. I told her “Anna don’t go” and she replied that “I don’t want to spoil his kindness, don’t make him angry”. to go and get her with my husband”, describes the neighbor.

The corral was about a kilometer away from the house where the girl lived with her baby. “I didn’t wait an hour, I called her, but he did it immediately. I called after about 40 minutes and he didn’t answer. Anna was an educated girl, rather than a very good one, who thought that the whole world was like her. This was an uncouth, rustic person,” she says afterwards, stressing that “we were trying to help her. She went to the police but was told she had to wait for court. She had told them that he was threatening her and they replied that “now we cannot do anything” and that the court’s decision should be issued first and then protective measures should be taken.

The tragic irony is that the court’s decision on custody of the child is expected to come out in the next few days, which of course is of no importance anymore.

“If you screw her I’ll kill you and the kid”

“Anna was an example of a person, with a very good soul, educated,” says her shocked aunt, emphasizing that she met her partner four years ago when she came to the village to write her book about the Basin. “She lived with him, they had a child, they broke up and they haven’t been seeing each other lately. Anna said she wanted to leave Germany with the child but she wasn’t sure. Every day she gave him the child and they played. He came in the morning and took her from the house, he probably told her “let’s go see the goats” because he loved the goats very much. But he would have something else on his mind. Anna lived at her grandfather’s house with the child and he came every day and saw her,” says her aunt.

She emphasizes that the 56-year-old had also threatened her over the phone and told her: “Anna, don’t screw me because I will kill you and the child and I will also be killed.” This happened about a month and a half ago,” he emphasizes.

“I’m not going to my son’s funeral,” says the killer’s father

“I will not go to my son’s funeral,” said the father of the 56-year-old perpetrator, emphasizing that they had no contact with his son in recent years.

“I know nothing. I was not talking to my son, nor had I seen my grandson. Only a madman would do such a thing, but he was not mad. I will not go to my son’s funeral,” said the attacker’s elderly father.

For even more news, enter the news feed of E-Daily.gr

The former goalkeeper of Olympiakos is shocking – “I became an alcoholic, I would end up dead!”