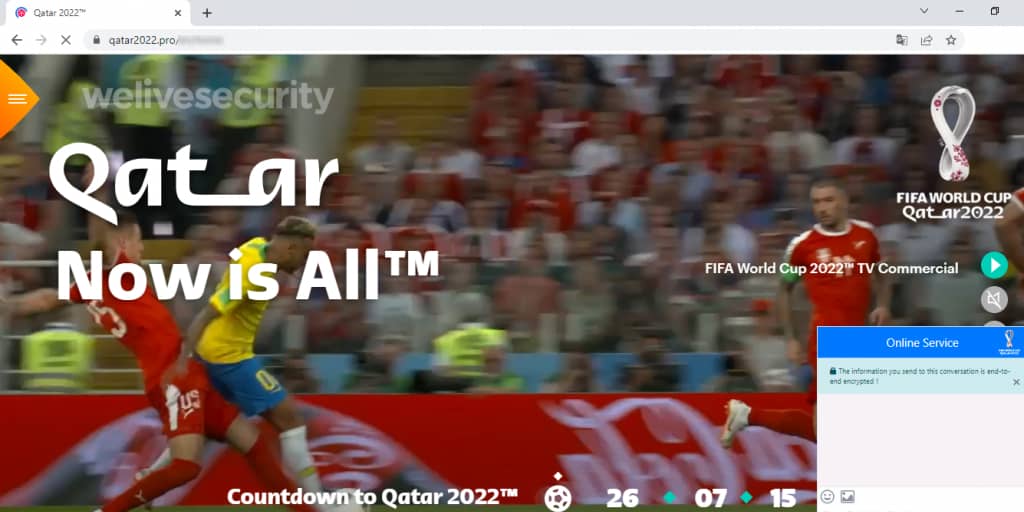 Cybercrime does not miss an opportunity to try to launch Internet scams with which to steal data and money from users. This is demonstrated by the recent campaigns created as a result of Black Fridaybut also the attacks that are being carried out taking advantage of the upcoming celebration of the Qatar soccer world cupwhich will take place between November 2 and December 18.

Precisely, the cybersecurity company ESET has already detected several scams in which cybercriminals are taking advantage of the next sporting event. They are of all kinds.

During the last few days, several global cyber-scam campaigns have been detected that seek to deceive people into believing that have won an economic prize related to the World Cup In a draw. As usual in these cases, to collect the supposed prize, it seems that you only have to fill in a few fields through a form and provide personal information, such as your full name, date of birth and telephone number.

the signature has detected advertisements that may be accompanied by the name of a contact person which, supposedly, will help you claim your prize. At some point, the agent will let you know that before you can claim the prize there is a tax or fee to pay. Once the transfer is complete, the scammers have accomplished their goals: they have stolen your money and personal information to continue the fraud or to sell it to other scammers.

Other security companies have warned about campaigns in which an attempt is made to rob the user by notifying them that they have obtained a ticket for the opening match of the World Cup. Obviously, this is a scam designed to steal your money and information, as in the previous case.

Cybercriminals have also been creating fake websites that supplant the legitimate ones and that, in some cases, have an almost traced appearance. Links to them are also distributed via spam emails, through fake profiles on social networks or on discussion forums.

Regardless of whether these websites appear to be legitimate or not, the bottom line is that they are launched in order to steal personal and financial data, login credentials, and other sensitive information.

The security firm has discovered a website that pretends to be the official World Cup website in Qatar, even imitating the real URL. The cybercriminals even created a “payment gateway” for people to buy their tickets. Once personal data is provided, it falls into the hands of criminals or is immediately sold to other malicious actors.

ESET points out that cases of people who have been contacted by email by ‘FIFA officials’ who They offered tickets for sale to attend the matches. Meanwhile, Reddit users are sharing message exchanges with people offering fake printouts.

To avoid falling into traps, it is essential that the user interested in attending the World Cup exclusively resorts to official points of sale. In this way, you will avoid disappointment.

To protect yourself, be wary

Likewise, the cybersecurity company warns about the importance of paying attention to suspicious ads and messages. Josep Albors, the firm’s head of research, explains in a conversation with ABC that, in order not to fall for any of the criminals’ tricks, the Internet user “must be suspicious of all offers that seem suspiciously good«. In addition, they have to »be wary of unsolicited communications, not click on links and avoid downloading files«.

“Although a page (that comes to us by email with an offer) may seem legitimate, you should avoid entering personal information, such as credit card information, without having reviewed it thoroughly. It is also necessary to have security solutions in the devices that are capable of identifying and blocking malicious emails and websites”, remarks the expert.

Manthopoulos for Papa: He’s still not “gone” and some present themselves as potential sons and daughters