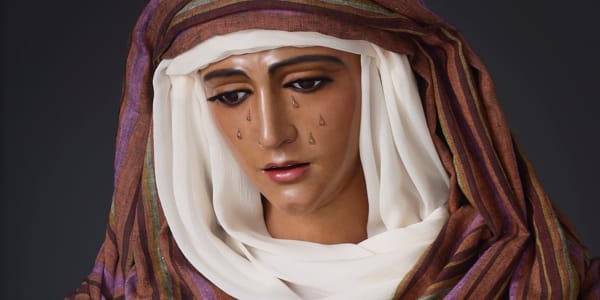 the pure face… but sweeter

by HAVANNEWS
in Entertainment
Reading Time: 4 mins read
A A
0
0
SHARES
2
VIEWS
Share on FacebookShare on Twitter

The hope of triana that devotees will find this Saturday will be the same Virgin castiza and brunetteof exotic beauty. There are no alterations this time in a size that has suffered highly invasive and transformative restorations along its history. But makes it sweeter, without the accumulated dirt stains on the face. It is a deep cleaning that the restorer, Peter Manzanoit has been “relatively easy” since maintain the polychromy of Luis Álvarez Duarte, from 1989, he has barely had to cover the gaps in areas such as the neck, temples or forehead due to pinpricks.

Nothing to do with the intervention that the same conservative carried out with the Christ of the Three Fallswhich kept remains of Ordóñez or Castillo.

In this case, it was easier. He offered the commission appointed by the governing board a level of cleanliness and they approved it.

Yes one notices deeper intervention in the hands. As approved by the general council, the devotional imprint of the kisses of the devotees had not only made part of the polychrome disappear, but was also causing irreversible damage to the wood. For this reason, it was decided that the color losses should be reintegrated, as can be clearly seen when looking at them.

In relation to this, the older brother affirmed that, although it will have to be decided by the board, he, “as a biologist, for health reasons I would not recommend anyone to do the kiss, since the Virgin can receive the affection of the faithful with a gesture, in addition to the fact that the pandemic is not over either… apart from the conservation of the image itself». This was pointed out by Sergio Sopeña in relation to the next besamanos of Esperanza de Triana in December.

The work that has been carried out during these almost four and a half months in the premises of the brotherhood house, in the strictest confidentiality, has gone beyond a mere conservative action in the hidden areas of the carving. Pedro Manzano, during the press conference offered this Friday, explained that “the areas that were burned by the fire at the end of the 19th century, where the wood still appears blackened, and where the areas not attached to the material have been removed». Also, they have been found fissures and separations in some ensembles, which have been solved, and the tiptoereplacing them with wooden spikes.

On the other hand, they have replaced arms by others with more updated ball joints to give a greater solidity to the position. Equally, the candlestick has been changed. «The previous one presented a fastening with metallic elements with a high level of oxidation and wedges on the back to give the current inclination of the carving. Also -explained Manzano- there was another piece to give it greater height. For this reason, the measurements of that position have been taken to reproduce them in a new twelve-stick candlestick, which has not been upholstered. Thus, the Virgin will have the same expression as her body, without the change of support being noticed.

Another of the actions has been the substitution of the crown retention system, which had a metal plate with four screws, which has been removed and a stainless steel cap has been placed, which can be removed to present the painful one without the need to wear the medal. Also removed all back hardware where the halo is placed.

This Saturday Hope returns, which will be in veneration until next Monday in the presbytery of the chapel.

A tight 3-way GOP Senate race in Pennsylvania with Trump-endorsed Dr. Oz in the mix is a huge contest we're watching tonight