The players from the Brazilian national team get involved in the presidential election campaign. Who is Neymar voting with?

The Painful Love Story of Pierre Tendean and Rukmini, Obstructed by Religion until Age

by HAVANNEWS
in Crypto, Entertainment
Reading Time: 3 mins read
A A
0
0
SHARES
1
VIEWS
Share on FacebookShare on Twitter
ADVERTISEMENT 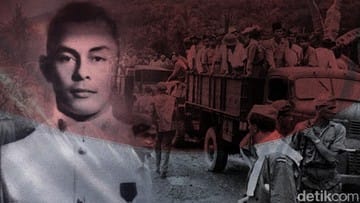 Pierre Andries Tendean or better known as Pierre Tendean is one of the heroes of the revolution. He died in the events of the September 30, 1965 Movement (G30S/PKI).

Pierre Tendean was born to Dr. AL Tendean, a doctor with Minahasa blood and Maria Elizabeth Cornet, a Dutch woman with French blood.

The story of Pierre Tendean becoming a member of the military

Pierre Tendean grew up with a love for the military. However, it was contrary to the expectations of his parents. Mother and father want their son to become a doctor or engineer.

Not giving up on his dream, Pierre Tendean was determined to enter the military world. He joined the Army Engineering Academy (ATEKAD) in 1958 in Bandung.

But unfortunately, Pierre Tendean’s life had to end tragically when the events of the September 30th Movement (G30S/PKI) occurred. He was an officer who became one of the victims of the kidnapping and murder of Cakrabirawa troops, before being dumped into a well at Lubang Buaya.

Not only had a tragic end in life, Pierre Tendean also had a bitter love journey. He has a long history with his girlfriend who is a woman of Javanese descent who lives in Medan, North Sumatra.

Pierre Tendean’s meeting with his lover began when he served as a military officer. He often travels to various parts of the archipelago.

When he visited the city of Medan, he found a girl named Rukmini Chamim or Mimin. Their acquaintance occurred because of the matchmaking of Pierre’s friends, namely Satrijo Wibowo and Setijono Hadi.

Rukmini whose full name is Rr. M. CH. A. Nurindah Rukmini Chamim is the eldest of four children, Mother. His father, Raden Chamim Rijo Siswopranoto, was a fairly successful entrepreneur in North Sumatra at that time.

According to the book Terror Coup G.30.S published by Pantja Sila (1965), Rukmini’s mother still had a kinship with the wife of General Sumitro, the former Commander of the Indonesian Armed Forces and Pangkopkamtib in the 1970s. In addition, it is also said that Rukmini is the nephew of Bantu Hardio, an army intelligence officer, who is married to Rukmini’s mother’s sister.

Rukmini is a Javanese-blooded girl from Yogyakarta from a devout Muslim family. His extended family belongs to the Barisan Muhammadiyah of Medan and Yogyakarta. Rukmini is also known as a pious girl and diligent in worship.

The meeting with Pierre occurred when Rukmini was still in high school. At first, Pierre Tendean often refused invitations to meet his two friends. He refuses to get to know anyone, and just wants to focus on sports and training while he’s there.

However, Setijono and Satrijo never stopped matching their best friend with the girl. They kept trying to get Pierre to get acquainted with Rukmini until finally Pierre, who was bored with his friends’ invitations, complied and agreed to meet Rukmini.

Unexpectedly, Pierre Tendean actually fell in love with the girl. Read on the next page.

Also watch the video about their love story below:

The players from the Brazilian national team get involved in the presidential election campaign. Who is Neymar voting with?