Spartathlon: Zisimopoulos triumphant for the 2nd year in a row

by HAVANNEWS
in Sports
Reading Time: 4 mins read
A A
0
0
SHARES
9
VIEWS
Share on FacebookShare on Twitter

Fotis Zisimopoulos, due to a mistake by the organizers, ran close to seven km more than he did, despite this he had the mental reserves to repeat his victory in last year’s Spartathlon, covering the 245 km from Athens to Sparta in 21 hours and 50 seconds.

THE Fotis Zisimopoulos he was simply stunning. The 40-year-old runner made history, winning for the second time in a row in the Spartathlon, under conditions that no one imagined at the start of the race at 06:45 on Friday morning (30/9) under the Holy Rock of the Acropolis.

The 388 runners started for the 40th Spartathlon to cover the 245 km to Sparta, but the race was marred by the organizers’ traction blunder with Fotis Zisimopoulos “victim”.

The Agrinio runner after Eleusis due to a wrong order found himself off the course, he ran aimlessly for about 7 km, from the top of the race he was up to 54 minutes behind, but this huge runner found the strength, he had the mental reserves to reverse the facts and to repeat last year’s triumph, when in his debut at the event, he had won first place.

The surprising thing is that Zisimopoulos, despite the delay he had unintentionally running off the course and about seven more km, finished in 21h.00:50, when last year he had won in 21h.57:20.

A mistake by the organizers deprived him of the opportunity for an even greater record in the historic race. The performance of 21:00:50 is the 3rd best performance of all time, since 1983 when the race officially started.
THE Yannis Kouros with 20h.25 from 1984 and 20h.29:04 from 1990 he is the only one better than Zisimopoulos in Spartanathlon. 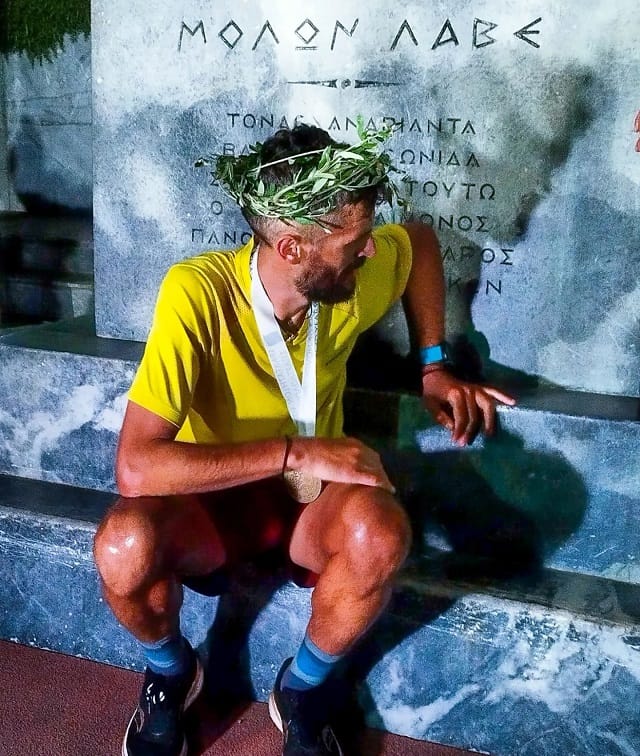 The blunder that took Zisimopoulos on the wrong track

After the 4th checkpoint (20th km) at the entrance to Elefsina, Zisimopoulos was 2nd at a distance of two minutes from the Japanese, Toru Somiya.

Then the athlete made a mistake at an intersection, with Zisimopoulos going off course, with the runner being informed by a fellow journalist that he had to turn back, enter the correct course and pass the next timing point in Megara (11th check point , 42.2 km) in order not to be cancelled.

“I asked twice, and they told me to go from here” he said clearly irritated to the iRunmag.gr journalist who spotted him with the camera just before he got back on the right route.

Zisimopoulos passed from Megara to 12th place and 32 minutes behind the leading Somiya,
He should find the peace of mind to redesign his tactics, knowing that as a mountain runner, as he approached Artemisio and closed the gap, on the climb to 1,062m. in the mountain paths, he would have the opportunity to turn the tables.

The big counter attack and the first overtaking at the top

The night turned into a thriller. Zisimopoulos at the 28th checkpoint (99.5 km), shortly after Ancient Corinthhad risen to 4th place, but the difference from the Japanese runner had reached 54 minutes. From that point onwards, Dimitris Kasimi’s athlete began his counterattack.

At her height Ancient Nemea (122.7 km) Zisimopoulos, although 4th, had reduced the time difference from the top to 28 minutes.

Entering the uphill section towards Artemisio, Zisimopoulos at the foot of the mountain had left behind the Hungarian, Tibor Eros and the Japanese, Yoshihiko Ishikawa and had only Somiya in front of him, at a distance 9 minutes.

Climbing the mountain even after dark was the great advantage for Zisimopoulos. So a little later on 52nd point control in the square of Nestani (170.5 km) the Greek runner arrived 1st, having behind him in a minute and a half Somiya.

The Japanese did not give up and entering a downhill section, overtook Zisimopoulos, passed the control point in 1st Tegea (193, km), having got a difference of almost five minutes.

It was at this point that Zisimopoulos achieved the second major reversal. Slowly he started to close the distance and at the 69th checkpoint (225th km) he was again at the top of the race, having left behind him against 6 minutes and 50 seconds Somiya.

There were 20 km to the finish and Zisimopoulos was now in complete control of the situation, he gradually “built” a distance of one kilometer and arrived triumphantly at the finish point, at the Leonidas statue in Sparta at 3:46 in the morning.

Digital twins give a new dimension to the infrastructure sector