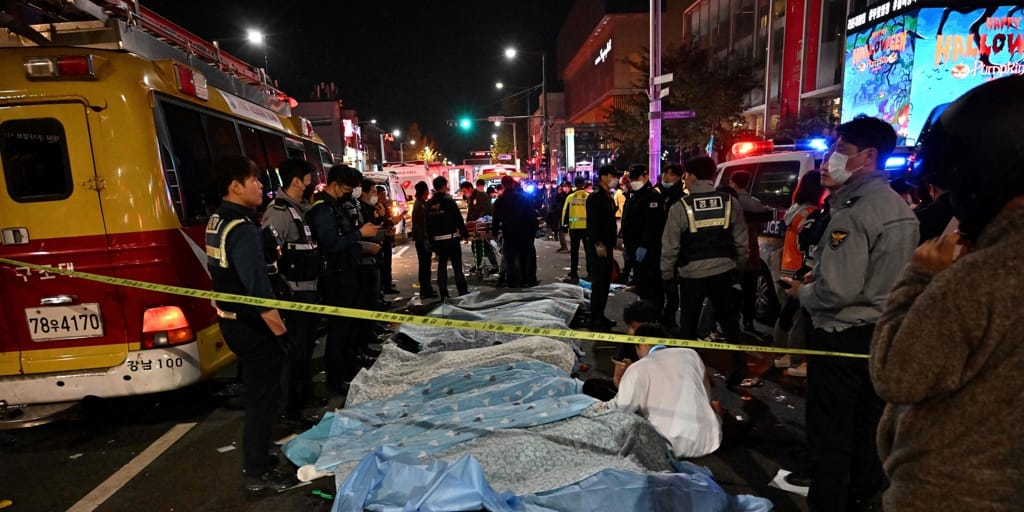 Gisele Bündchen: This is why I'm divorcing Tom Brady

The party of death ended up being the death of the party. South Korea was awaited this Sunday by the most tragic sunrise after daylight revealed the catastrophic magnitudes of the stampede that took place on Saturday night in Itaewon, one of the most popular bar areas in Seoul. At nine in the morning, the official death toll was 151 deceased, of which 19 are foreigners, and 82 injuredthe majority young people in their 20s who were celebrating the Halloween party. But the authorities fear that the number will increase and so it has been: hours later the number of deceased was 153 – 22 foreigners – and 133 wounded. Perhaps these data will increase, because the Police have received 350 reports of disappearances and the parents of the kids who came to Itaewon last night are desperately looking for them in hospitals. Of the deceased, 97 are women and 54 are men and among them there are, in addition to South Koreans, young people from China, Norway, Iran and Uzbekistan.

Shock reigns throughout South Korea because it is the worst tragedy since the shipwreck of the Sewol ship in 2014, in which 304 of its passengers perished, most of them teenagers from a school who were going on vacation to the tourist island of Jeju. Just like then, fatality has returned to the young people, who packed Itaewon’s bars and clubs in the first Halloween celebration after three years of prohibition due to the Covid-19 pandemic.

As survivors and witnesses are counting on social networks, the crowding occurred in one of the downhill alleys near the famous Hamilton Hotel, which is usually the meeting point for young people who are left to go out in the area. “People kept pushing in the alley downhill, causing many people to fall like dominoes,” a survivor who miraculously escaped said on Twitter. “I thought I would be crushed too because the people behind kept pushing without realizing that many people had fallen at the beginning of the stampede,” he details the anguish felt by the thousands trapped in the alleys of Itaewon.

Firefighters have moved “dozens” of bodies that could be deceased.

«Who would have thought that I would have to fly to Korea tomorrow, but to say goodbye to the love of my life… and on his birthday. Life is so unfair », Gabriela writes in Spanish on Twitter, accompanying her message of a broken heart. “Without words for the pain” she suffered, the young woman confirmed the death of her boyfriend, Choi Boseong, 24, and his friends, after a first tweet in which he explained that they were missing and that someone had found his jacket and his mobile phone on the ground.

As can be seen in the videos that circulate on the internet, in the alley, only four meters wide, thousands of people who could not move or barely breathe, many of them dressed in their sinister Halloween costumes, crowded together. Due to lack of air in the crowd, many of the victims lost consciousness and fell to the ground, being trampled by the avalanche. “People fell stacked on top of each other like in a tomb. Some were gradually losing consciousness and others seemed dead at the time,” a witness told South Korea’s Yonhap news agency.

Another survivor, 20 years old and surnamed Park, pointed out that everything had happened suddenly, when the crowd had headed to the fateful alley. “A short person like me couldn’t breathe. She was able to survive because she was situated on one side of the alley. It seems that the people in the center suffered the worst, ”Park reeled.

trapped in the mound

According to another survivor cited by Yonhap, but who preferred not to reveal his identity, the rescue of those trapped in the montenera was delayed because the emergency teams had to enter the alley from behind, since the main streets of Itaewon were crowded for the celebration of Halloween.

In addition, other witnesses blame the tragedy on the owners of the nearby bars and clubs, who did not let those trapped in the alley enter, thus preventing the mass of people that had formed from relieving themselves. “It seems that the victims are more serious because there were people who tried to escape to nearby shops, but they were thrown out onto the street because they had already closed,” complains another survivor who also hides his identity.

Be that as it may, the photos and videos circulating on the internet are horrifying. In addition to showing the crowd trapped in the alley while the music from the bars continues to play, other images show the attempts of the nurses to revive the fainted wounded by giving them cardiovascular massages. In other shots you can see long rows of body bags lining the sidewalks.

The tragedy broke out after ten at night, when the emergency telephone numbers in Seoul began to receive a barrage of calls from the Itaewon area warning of the stampede and suffocation suffered by those who had been left in the middle of the crowd or had been trampled. by the crowd. “Her boyfriend phoned me around midnight, crying and saying that Ye-sol was dead, that she had been under a pile of people for over an hour and that he had tried to get her out, but he had not been able to,” she told dismay. Yonhap the mother of a 19-year-old girl, Ahn Yeon-seon, at Soonchunghyang University Hospital, the largest in Itaewon and where most of the victims were transferred.

The tragedy in Seoul is the second stampede that shakes Asia in just one month, the most populous continent on Earth and where mass events are always a risk. In early October, 127 people died in another crowding at an Indonesian stadium when police fired tear gas inside to control riots by fans angry over the defeat of the local team.

Another 36 people were killed in an avalanche in Shanghai during the 2014 New Year’s Eve celebration, but the worst stampede in recent years took place on November 22, 2010 in Cambodia. In its capital, Phnom Penh, 347 people were killed and 755 others injured in a crowding on a bridge during the Water Festival celebrating the end of the monsoon. As on those occasions, the trigger in South Korea has also been a celebration, that of death on Halloween, which has ended up killing the party and more than 150 people.

Gisele Bündchen: This is why I’m divorcing Tom Brady

5 Plants for the Bathroom, Make Aesthetics and Reduce Humidity