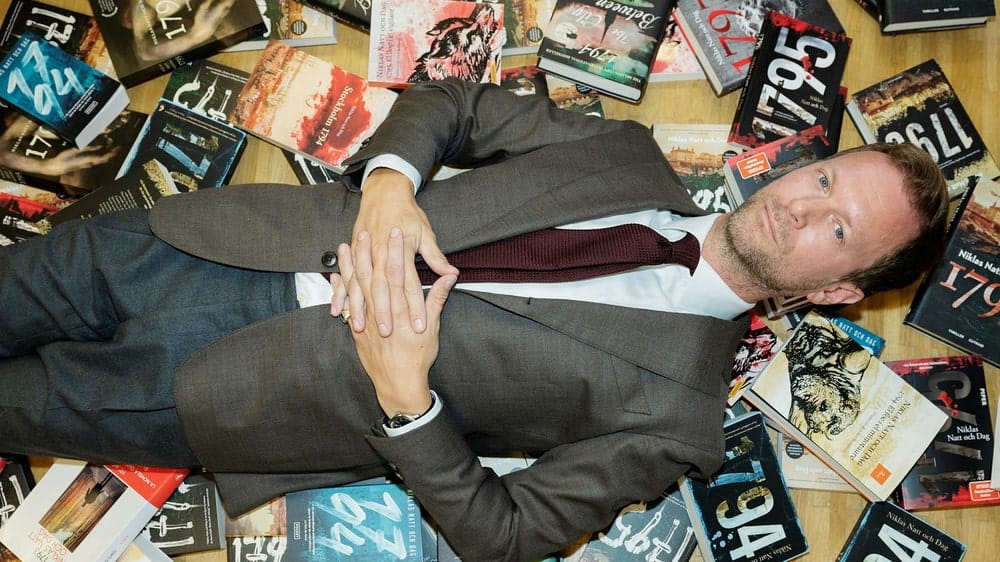 The author Niklas Natt och Dags debut novel 1793 is one of the biggest Swedish book successes in modern times. Now it comes in series format.

It’s almost gone a year since the third and final part in Niklas Natt och Dag’s “Bellman Noir” trilogy landed in bookstores. The books, which are a mixture of historical novels and detective stories, are set in late 18th century Stockholm and depict a city characterized by violence, disease, dirt and general misery. The books have been a great success: the first part in the series, 1793, has sold more than 800,000 copies in Sweden and the rights have been sold to 36 countries.

“It didn’t feel as horrible as I thought it would to leave the trilogy. I was quite worried that I would be completely alone and without my pretend friends”, says Niklas Natt och Dag, who for his new novel project has moved to another century.

In the mid-15th century, his ancestors killed Engelbrekt Engelbrektsson, who led a revolt against the Kalmar Union, lost the capital to the Christian Tyrant, and was forced into exile after demanding the abdication of Jean Baptiste Bernadotte.

“I’m trying to make fiction out of it, it will probably be a thicker book than I originally thought,” says Niklas Natt och Dag.

After the successes with the 1793 trilogy, Niklas Natt och Dag has been able to become a full-time writer, his company Textia had a turnover of SEK 6.4 million last year. The given path for successful novels is usually a film or TV series, but Niklas Natt och Dags 1793 is now given life as a comic strip novel.

“If it were to become a TV series, no fool would pay for a perfectly recreated Stockholm in 1793. The dream would be that Peter Jackson would persuade someone to spend 600 trillion on such a project, but in reality it is more likely that you have to compromise quite hard. In serial form, there are no such restrictions.”

The adaptation has been made by four Italian screenwriters and cartoonists in close collaboration with the author himself. The bound series album is supplemented with newly written commentaries by Niklas Natt och Dag, which provide an insight into the book’s historical background and rich source material.

“It’s really a coincidence and nothing sought on my part. These very talented Italians contacted the agency and we thought it was a good idea. I’m a pretty die-hard comics connoisseur, it’s a medium I’ve appreciated for a long time. It offers unique opportunities and I used a lot of visual material from my research for the books.”

Among the favorites in the comics world, Niklas Night and Day highlighted Alan Moore, the creator of the comic book From Hell, which is about Jack the Ripper.

“It took 12 years to make and ends with historical footnotes that are absolutely unparalleled. I’ve always wanted to do a tribute to that book. I wrote a lot of historical footnotes, so it gave me an excuse to brag about all the research I did but never got to show.”

How commercially viable is a comic book really?
“Good question, it’s a bit of a kamikaze project. My prejudice is that it is not at all commercially viable, but the investment the publisher is making suggests otherwise. Many of the adult series that are made internationally are not a medium that is taken seriously in the Swedish market. The dream would be, and it is very ambitious, to be able to open a door to that world.”

What doors has the 1793 trilogy opened?
“The coolest door is that I can contact the author whose book I read without it being super weird. Suddenly you can have lunch with that person. Most of them are very accessible and share their creative processes, which I think is fantastic.”

How much have you earned from the books?
“I’m not saying. I had very low expectations. I share an office and am close friends with Fredrik Backman, who was wildly successful when I was most rejected. The possibility of even being able to make a living appeared to be something that could not even be questioned. I took it for granted that it would be an okay extra crack and I didn’t ask for more either. Being able to work on it full-time is amazing.”

Background: Freelance journalist. The surname Natt och Dag is irregular and known from 1280, according to the National Archives. That makes it Sweden’s oldest living noble family.

Kasami’s magical night with Juventus and the apotheosis for the world of Olympiakos (pics, vid)

Until the grandchildren say enough