Holidays on the Adriatic: how Jesolo became a seaside resort

Matchday 32: That was Saturday

by HAVANNEWS
in Hot
Reading Time: 3 mins read
A A
0
1
SHARES
1
VIEWS
Share on FacebookShare on Twitter 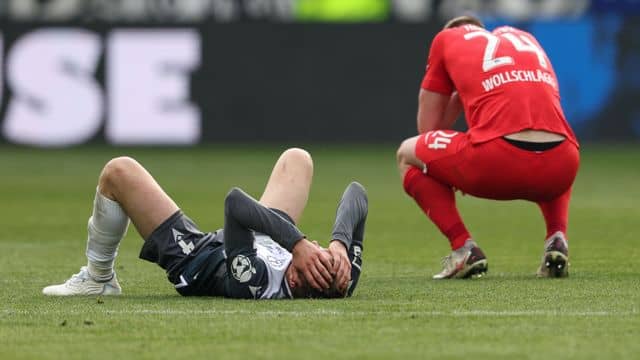 Berlin (dpa) – Had, had, Hertha BSC. The Berliners were very close to staying up, but then things didn’t go at all for the capital club.

Coach Felix Magath then looked at FC Bayern’s performance with concern – that was also due to VfB Stuttgart. In Cologne and Freiburg, not only the fans dream of magical nights.

Who follows SpVgg Greuther Fürth directly into the 2nd league, who has to – or is allowed – to relegation? After the 1-1 draw between Arminia Bielefeld and Hertha BSC as well as between VfB Stuttgart and VfL Wolfsburg, nothing is finally clear. FC Augsburg (35 points/37:51 goals) is practically saved, Hertha (33/35:67) is 15th in the table. better conditions than VfB Stuttgart (29/37:56) on the relegation place and Arminia Bielefeld (27/25:50) on the direct relegation place 17. “In our situation, the point is not enough,” said VfB striker Sasa Kalajdzic sky.

Up to and including the 2019/20 season, all games on matchday 33, like matchday 34, started at the same time on Saturday at 3:30 p.m., even if there were exceptions. This season, the penultimate matchday will be distributed from Friday to Sunday – with explosive schedules. Relegation candidate Bielefeld already plays at VfL Bochum on Friday. Stuttgart (Sunday in Munich) already knows at the start of the game what is threatened in the event of a defeat – and also whether Hertha (Saturday evening against Mainz) can still be caught at all.

Felix Magath wasn’t thrilled when he saw the result of Bayern‘s game in Mainz. “The season goes until the 34th matchday and I don’t know why a team can stop playing three weeks beforehand,” said the Hertha coach, who himself had once won the championship with Bayern, about the 1: 3 of the record champion. “It doesn’t serve the Bundesliga and the competition.” Very likely background: The Stuttgart game in Munich on Sunday. Bayern coach Julian Nagelsmann commented quite tight-lipped: “Very clever of him, I guess he won’t do it entirely unselfishly.”

Erling Haaland reacted to the death of his advisor Mino Raiola with two words and a photo – and the message said a lot. “The best,” wrote the 21-year-old Norwegian from Borussia Dortmund on Saturday night on his verified Instagram account for a heart and the picture that shows him sitting next to the standing and smiling Italian. His family informed about Raiola’s death on Twitter on Saturday afternoon. Haaland was playing with BVB against VfL Bochum, he scored three goals in the 3: 4. One of the first to express their condolences to the family was Haaland’s father Alfie. “Rest in peace. The best,” he wrote on Twitter immediately after the news of his death.

Of course, the fans of 1. FC Köln have been dreaming of magical nights in the European Cup for a long time. Just like the supporters in Freiburg. After the 4-1 win at FC Augsburg, the people of Cologne are sixth, which is now at least enough for the Conference League. The qualification for the Champions League is also theoretically possible. Or something in between? “We clearly want to win the last two games and then definitely move into the Europa League,” said Mark Uth after the 4-1 win at FC Augsburg. SC Freiburg remains a big competitor, who even jumped to fourth place thanks to the 4:3 at TSG Hoffenheim, which entitles them to start in the premier class. “Our goal must be to have the greatest possible success,” said Christian Günter.

Since May 1st falls on a Sunday this year, there are no games in the top football leagues on that day at the request of the security authorities. The two Bundesliga games planned for Sunday, Borussia Mönchengladbach against RB Leipzig and Bayer Leverkusen against Eintracht Frankfurt, will take place on Monday (8.30 p.m. / DAZN) because Leipzig and Frankfurt were still playing in the semi-finals of the Europa League on Thursday.

Holidays on the Adriatic: how Jesolo became a seaside resort

They didn’t buy it for nothing! Robert Lewandowski, decisive goal for FC Barcelona + what Xavi said