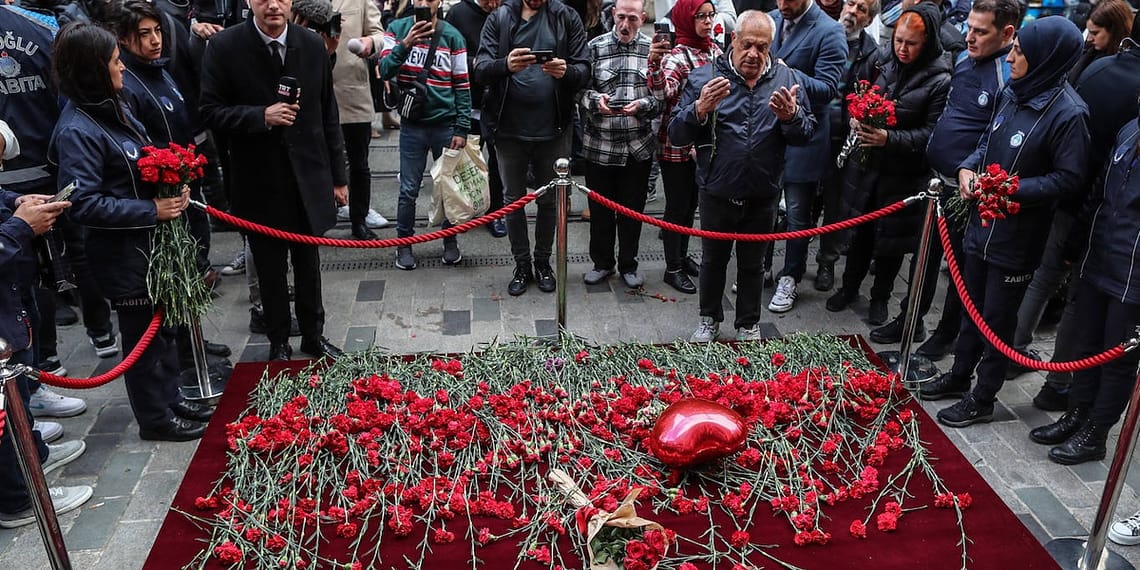 Istiklal, the street where the Istanbul attack took place, tries to recover normality

A corridor with more than a thousand Turkish flags runs through the heart of Istiklal. It descends from Taksim Square to Galatasary Square and in the middle of the route there is a point marked by the red of the flowers that citizens and tourists left in the place where on Sunday a bomb ended with the lives of six people and injured more than eighty.

While this important artery of the city tried to recover some normality, the investigation advanced and Ankara announced the arrest of the alleged terrorist and of 45 more related people with an operation that linked the Kurdistan Workers’ Party (PKK).

The Turks received condolences from around the world, but were clear in not accepting those from the United States due to their collaboration with the Kurdish militias in northern Syria (YPG), which are the sister arm of the PKK.

Turkey points to the Kurds as the authors of the first attack in Istanbul since 217, but the PKK released a statement through social networks to deny its involvement. “Our people know that we have no relationship with this incident, that we never have civilians as a direct target and that we do not accept actions against civilians,” read the text of this group considered terrorist by Ankara, the European Union and the United States.

A similar message was launched from Syria by the Syrian Democratic Forces (SDF), a Kurdish-led militia supported by the United States, whose commander, Mazlou Abdi, he said “we had nothing to do with the bomb.”

The responses from the Kurds came after information from the Ministry of the Interior about the detained woman, Ahlan al Bashir, of Syrian origin, who would have confessed to having been trained by the PKK to commit this attack. The head of the Interior, Suleyman Soylu, detailed that the alleged terrorist crossed into Turkey from Afrin, the Kurdish canton of Syria now controlled by the Turks, and that she received the instructions in neighboring Kobane. The local media broadcast images of the moment of the arrest.

Speaking to the BBC, security expert Omer Ozkilzilcik explained that the PKK “only seeks to create confusion by denying its participation” and when assessing possible responses by Recep Tayyip Erdogan, he anticipated that “it is possible that very soon we will have a new military operation in northern Syria because that has been the way to prevent terrorist attacks on Turkish soil since 217. It is one of the most repeated scenarios among Turkish analysts in a country that is in a permanent electoral campaign ahead of the June elections in which Erdogan is playing for the presidency.

Istiklal again became a procession of tourists and onlookers who mixed with politicians and journalists in the vicinity of the site of the attack. Life made its way in the place where terror reminded Istanbul of the wave of attacks suffered between 215 and 217. Phone in hand, everyone wanted a photo of the place, also selfies. Two Argentine tourists were still unable to believe what they had experienced on Sunday afternoon because “we were about a hundred meters away, the explosion was huge and we went into a nearby shopping arcade where the employees closed the shutter. They were moments of great anguish.”

5-magnitude earthquake Southeast of Itea, a night of anxiety in Corinthiakos