A survey by the British Independent published a graph showing the number of hours a person spends reading per week, for each country.

The country that reads the most is India, as the graph showed that it averages 10 hours and 42 minutes of reading. That’s a pretty good amount for a country as a whole.

The second country with the most love for reading is Thailand with 9 hours and 24 minutes and third is China with 8 hours a week. Averaging more than an hour a day is great and that should be the goal for all countries. 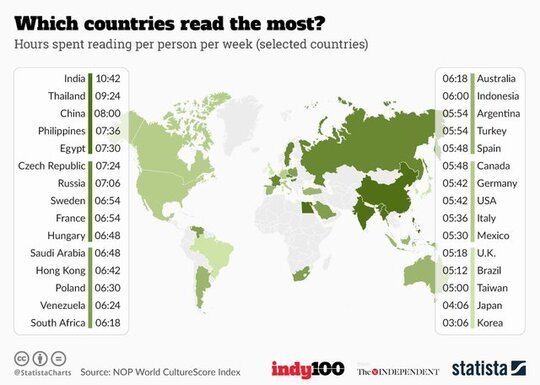 The US ranked 42nd with 5 hours and 42 minutes of reading per week.

The same survey added which people in Europe spent more money on newspapers and stationery. People in Slovakia spent the most money on books, newspapers and stationery (2.1% of household income), followed by Germany (1.6%) and Poland (1.4%). At the opposite end of the scale, the lowest shares were recorded in Bulgaria and Greece (both 0.6%), the Czech Republic, Spain and Malta (all 0.7%).

Finally, it was recorded that more women read books than men in all countries surveyed, but men who read do so for longer periods than women.

Events in Majorca | Arrested for trying to kidnap a young woman