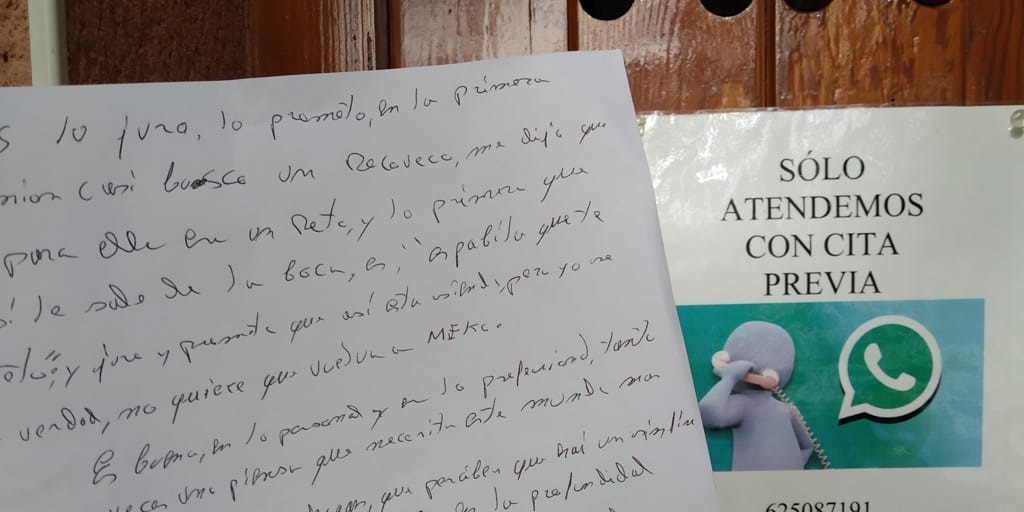 «She told me that I was a challenge for her and the first thing that almost came out of her mouth was: ‘Wake up, I’ll put you in’. And I swear and promise that it is being so; I know the truth, he doesn’t want me to go back to Meco. She is good personally and professionally, so much so that sometimes one thinks that this world needs more women who say and do. Thus begins the letter that a 59-year-old ex-offender who has been in prison for several decades has written to his social worker, Gema.

She has posted the text on her Facebook page. “Starting my day like this makes my work great!”, This professional states as an introduction to the letter. She is part of the Pretox team, an association for the prevention and help of addictions based in the capital of Toledo and at a provincial level.

The author of the letter is Goyo, a former bank robber who has not yet served two years going to the Pretox facilities on General Villalba Avenue. But he hasn’t been out much longer either. “He says that he has been in prison for about 40 years in total; not in a row, but in several batches. Between one entry and another, very few months passed. He robbed a bank when he was free, or taking advantage of a prison permit, and returned to prison» explains the social worker.

«Goyo has committed a crime all his life and has consumed all kinds of drugs. The money he had from his robberies, which was a lot, he spent on narcotic substances and has taken everything », continues Gema. «Precisely for this reason, he does not give value to money. And he says it often -says the social worker-. Not long ago, without having any money, I brought him the 400 euros that he receives for non-contributory pay. He wanted to buy a perfume and I told him that you buy it for Christmas and if you have saved all year ».

Since Goyo’s handwriting is illegible, Gema asked him to read the text of the letter, the original of which she keeps in her office. “He came the next day, did it and I took the opportunity to write it on my computer.” «She is good both personally and professionally. so much so that sometimes one thinks that this world needs more women who say and do. You perceive that there are endless musical notes that in the depth of the eyes are lost in the litany of darkness that we human beings have; and that in it you know, because you see it, that those spaces are full of light, love, happiness and life, ”continues the letter.

“That’s why this world shouts: ‘Come on, Gema, up!’ And, as I tell you, if I don’t get smart, I swear, I won’t hesitate, I’ll quit. But surely she won’t leave me, with her eyes she would tell me: “Come on, Goyo, she stops crying like an old woman!”, ends the letter addressed to Gema, “because this time needs women like you.”

Gema is happy with Goyo’s gesture for a simple reason: «I rarely receive a thank you from our users due to their physical and psychological conditions. They are people who are usually very deteriorated, who have already gone through several treatments and who do not feel grateful to each of the people who have passed through their lives. They have lost many healthy and educational habits.”

Goyo, who lives in a rented flat, goes to Pretox to see the psychologist and her. It is his only ‘family’, along with Pilar, from the Penitentiary Ministry of the Archdiocese of Toledo, who has also been by his side in prison. «We keep the little money he has and we give it to him as he asks for it -explains Gema-. She has a non-contributory pay of 400 euros. She knows we are not a bank. If he asks for it, I give it to him. It’s actually a retention method so you don’t spend it right away; it is our objective”, explains the social worker.

She, who made Goyo ugly that he did not write that letter that promised him so much, will now have to do her part and bring him garlic from Las Pedroñeras. Quid pro quo, Gem.

Recruitment at the Ephorate of Antiquities of Halkidiki and Mount Athos: applications from tomorrow (28/9) – Newsbomb – News

Orelsan announces the release of 15 “Civilization” vinyls in limited editions