Hurry up! Car prices will continue to rise

by HAVANNEWS
in Stock Market
Reading Time: 6 mins read
A A
0
0
SHARES
0
VIEWS
Share on FacebookShare on Twitter
ADVERTISEMENT

An average increase of 19% has been recorded in the last five years in the sales prices of new cars, and it seems that the rise will intensify in the coming months.

They are narrowing their margins consumers who wish to acquire one new car in reduced price as as evidenced by the cost will continue to rises continuously and indeed in the following months rise in prices it will be more than noticeable.

So if some consumers have decided to acquire new car it will be good to hurry up to it order as the prices they will continue to they increase and not expect to price reductions as the longer they delay it the more deep they will lay hands on… pocket their!

In fact, according to the German Automobile Club ADAC, the price of youth cars has grown on average to approx 19% from 2017! This n increase, which varies by category and can go up to 44% for small city cars.

After all, who hasn’t noticed that the prices of new cars were now increasing by almost monthly rate. An unprecedented frequency resulting from an unprecedented acceleration over the past two years. No one manufacturer, no section, none model it does not escape him, even if the increase is not the same everywhere. According to a study by the German Automobile Club ADAC average list prices increased by 19% between 2017 and 2022. The increase even reached a record 44% in five years in the category of small cars city, i.e. of cheaper ones in the market. 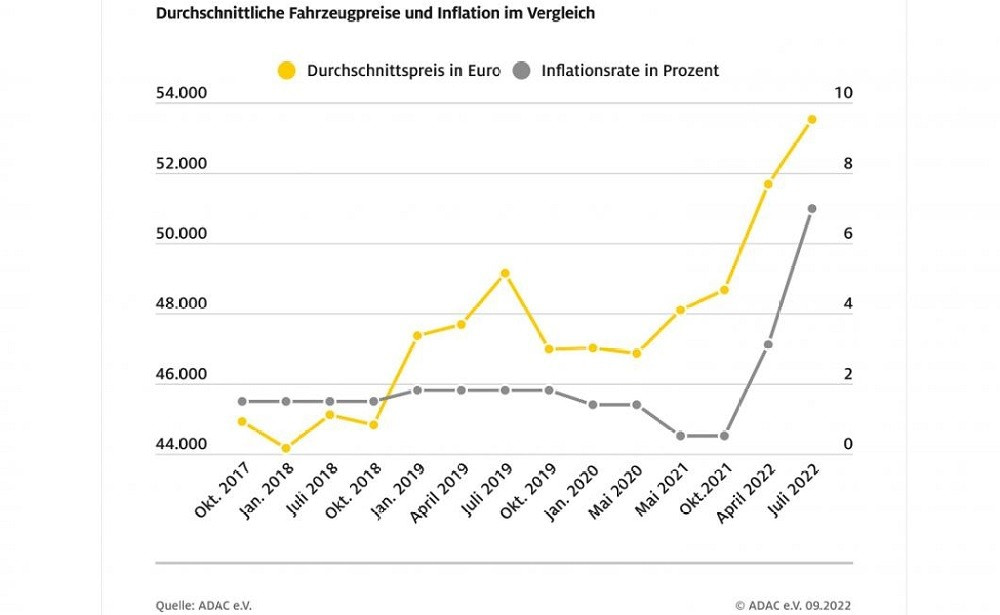 Many factors her increase of design costs and production partially explain the rise in prices. First, the evolution of environmental regulations pushes them manufacturers to they electrify their vehicles when adding already expensive systems her control pollution not enough. However, one hybrid engine or one electric drive system costs more than one net thermal mechanism.

In addition to electric drive systems in vehicles, there was lack of semiconductors which arrived immediately after coronavirus which forced the factories to delay deliveries of new cars while today we have him war in Ukraine which interrupts her supply chain of manufacturers since last February causing at the same time the steep rising at energy prices.

THE ADAC also notes that while higher it’s the scope, the lower the inflation. For good reason, the profit margin at small cars are low as their price must remain attractive, while the most luxury models yield the largest profits. Therefore, the less fortunate drivers they are punished proportional. The institution reports an increase 21,3% for compact models and “only” 12,4% for luxury cars between 2017 and 2022. Therefore, the manufacturers luxury models they seem to depreciate some of it cost at profit margin their. But they also benefit from their own increase in demand and still manage to increase their annual sales volume.

if she increase of prices it strictly reflected her cost increasethe margins profits of manufacturers they should remain unchanged. However, many of them have announced record profits in the last months and even selling fewer cars but in a long time more expensive prices.

Major groups announced profits over 30% with a double-digit rate of decrease of sales due to the increase of prices but also the abolition of many publications.

According to ADAC, the manufacturers are also favored by government subsidies of the member states granted to consumers and companies for the market electric vehiclesin order to maximize the achievable profit margin their.

The organization points out, for example, that some electric model sold on 22,550 euros at Germany, where his ecological bonus amounts to 6,000 euros, while it costs 19,800 euros at France, where his bonus is limited to 5,346 euros. THE price difference between him french and his German model is therefore approx 1,000 euros including the bonus (advantage of France), while in the list it is 2,750 euros. So the difference seems to weigh on German Statewhich also applies VAT 19% against 20% at France. In the ADAC study it is emphasized that the electric model which is being researched was released on France in the price of 16,990 euros in the spring of 2021, price which therefore increased by approx 16,5% in little more than one time!

THE ADAC noted her price increase some models not limited to Europe. In particular, on United Stateswhere the car trade works differently (taxation and otherwise integrated costs, greater freedom for distributors, etc.), its analysts Kelley Blue Book noted that the average selling price of new cars had broken one record reaching them 48,182 dollars in July 2022, increasing 11,9% in a year and even 41,4% compared to the 34,077 dollars recorded by Edmunds the 2016. Mechanically, this difficulty in accessing the new domestic market leads to sharp rise in second-hand prices, again penalizing lower average income motorists. The question now is how long will and how long can this inflation last…

Digital twins give a new dimension to the infrastructure sector