Worse results than expected from SKF - Turnover above expectations

"One should have somewhat limited expectations"

Google’s translation tool (Google Translator) has come under fire after followers of Tesla’s major shareholder rush to find out what the cryptic word posted on Twitter means.

It is known to all that the technology mogul, Elon Muskuses his account at Twitter for many things. To inform the public about his ambitious projects, to express his personal opinions, to troll and much more.

THE founder of Teslawhich remains to be seen if it will eventually acquire Twitter, many times over criticizes various social issues about the political life of his country, international crises, the war in Ukraine, the energy crisis, etc.

Sometimes the SpaceX CEO tweets and cryptic phrases and lets his followers comment on what it might mean. This is what he did this morning when he uploaded a tweet with only one word, that too in Greek.

Of course, several users resorted to Google Translate and then to Wikipedia’s “Dialectics” entry to figure it out, then informing other commenters of the “art of arriving at truth through the clash of opposing views.”

However, many users’ theories about why Musk posted this word were also of interest, with some taking it as a reference to the Russia-Ukraine conflict. 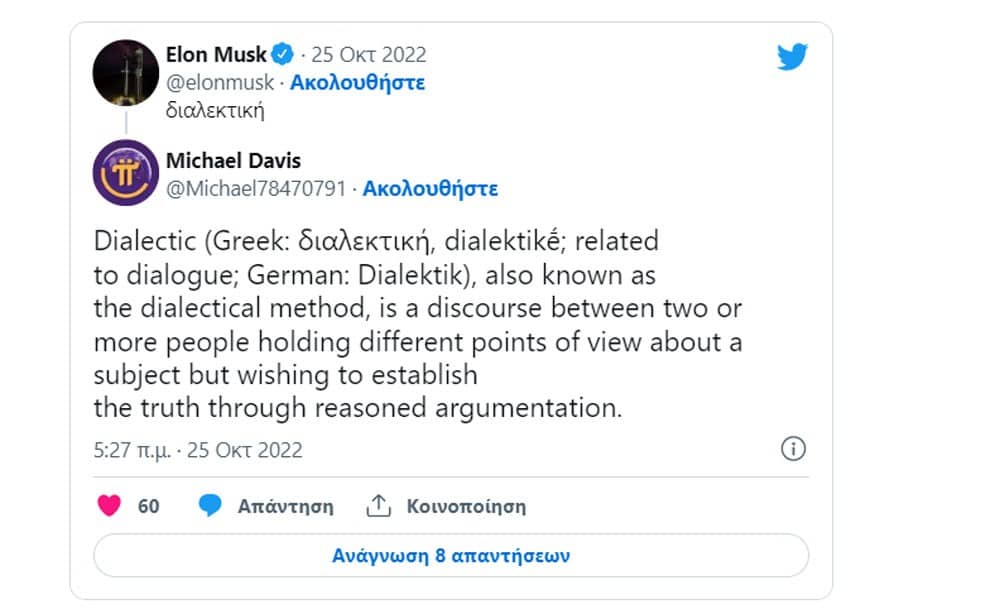 Some others speculate that this could be the name of his next child. The six he already has have even weirder names (Nevada Musk, Griffin Musk, Vivian Jenna Wilson, Damian Musk, Saxon Musk, Kai Musk, X Æ A-XII Μασκ, Exa Dark Sidereal Musk).

READ ALSO:
Musk is a dad again with an even weirder baby name
Musk is turning things around for Ukraine
What does Elon Musk’s perfume smell like?

Worse results than expected from SKF – Turnover above expectations

“One should have somewhat limited expectations”

Fires in Kefalonia: The fire in Paliki is ongoing – The picture is better in Spartia – Newsbomb – News