Cardano seems poised for a bounce to $1

by HAVANNEWS
in Crypto, Hot
Reading Time: 2 mins read
A A
0
1
SHARES
25
VIEWS
Share on FacebookShare on Twitter

saw a lot of buyers around $0.92 which could have triggered an upward momentum.

At the time of writing, Cardano appeared to be trading at a key support level that had attracted many buyers. As long as it held, ADA had a chance to rally towards $1.

Cardano held above a significant demand zone amid buy signals.

The layer 1 platform, hoping to compete with the likes of and , consolidated around this price point, suggesting that a bullish impulse might be underway.

The Tom DeMark (TD) Sequential indicator generated a buy-signal on the daily chart of ADA. The bullish formation developed as a red nine-candle, indicating a rise of one to four candles per day.

Increasing upward pressure around the current price level could help confirm the optimistic outlook and Cardano towards $1. 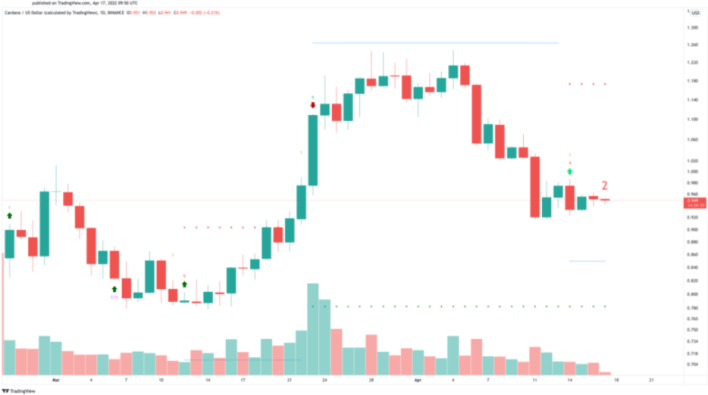 Source: TradingViewTransaction history shows that Cardano has built a strong foothold around $0.92. Based on IntoTheBlock’s In/Out of the Money Around Price (IOMAP) model, more than 44,790 addresses had previously purchased nearly 6.8 billion ADA around this price level.

The significant demand zone could prevent prices from falling and help confirm the bullish thesis.

Nonetheless, a bullish impulse around the current price level could be strong at $1 Resistance where 241,000 addresses hold nearly 4 billion ADA.

A daily candle close above this hurdle could lead to higher highs.

Source: IntoTheBlockIt is worth noting that Cardano must avoid printing a daily close below $0.92 as it could cause investors to exit their long positions.

If this support level breaks, ADA could see a sell-off taking it to $0.80 or less.