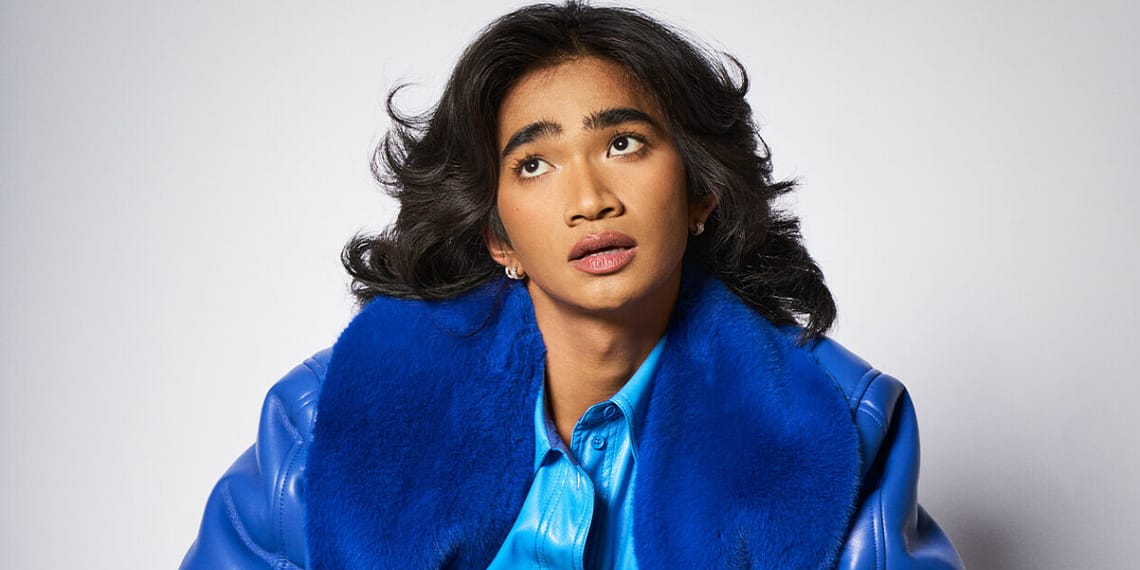 by HAVANNEWS
in Entertainment
Reading Time: 10 mins read
A A
0
0
SHARES
0
VIEWS
Share on FacebookShare on Twitter

Bretman Rock sits in hair and makeup. Around his neck he has what looks like a metal travel pillow. It turns out to be a new type of fan that matches his bright blue outfit – a set of flared pants. This is his first time in Stockholm.

– I arrived at the right time, it’s so hot at home so I needed a change of weather. And then I have this cute leather suit that I can’t really wear in Hawaii and I needed a place to wear it so duh, I came to Sweden.

It is the end of September and the sun is shining. Bretman doesn’t seem to know how lucky he actually is with the weather.

– Firstly, it’s so cold here and secondly, it’s so clean! It feels like I could lick the ground without getting sick.

It all started with a contouring video that went viral. Fast forward a couple of years and Bretman Rock is a beauty icon who qualified for Forbes 30 under 30 and also has his own reality series on MTV which has now received a second season. I’m curious if he’s had time to stop and reflect on those things.

– Girl, it feels like I don’t even have time to sit down and digest everything I’m doing. Even now I feel like I forgot it happened. So thanks for reminding me.

Bretman’s latest assignment is as global ambassador for Klarna. He is in Sweden to record an advertising campaign together with Felix Sandman. See you at the head office on Sveavägen. It is Sunday and the venue is empty, except for the team that is there.

Anyone who follows Bretman knows that he often travels for work. At home in Hawaii, he lives in the middle of nature with his dogs and the latest addition: two chickens named Marites and Martin, ordered online and hatched in an egg hatching machine.

What is it like to live a life with such great contrasts?

– I have sworn that I am Hawaii’s Hannah Montana. So it’s cool to live both lives I guess. But at the same time, it can get a little confusing. Especially for my niece. She is just discovering who Bretman Rock is. I think she is starting to realize that I have money and now I have to buy her Roblox money all the time.

It can be expensive…!

– Yes. I guess I don’t realize I’m leading a double life until my niece starts calling me Bretman Rock.

How do you establish yourself?

– I grew up very spiritually. If you stay grounded, you don’t have to. I just think I’m a very grounded being. Many times I think I just have to remind myself to be grateful. To be honest, all these calltimes have made me stressed but these are worries I could only dream of when I was 16 in Hawaii, sharing a room with my mother and sleeping on the floor.

It sounds like you have good self-confidence. Have you always had it?

– Yes, my father is also a lion and I know that the whole lion thing is self-confidence and things like that. But I also think there’s something about being raised by a metrosexual man. My dad had super long hair. He had a 12-step Korean beauty routine before it was even a thing. So he deserves credit. My mother is a scorpio. I don’t want to make my whole personality about zodiac signs but my mom didn’t let anyone give her crap. I got my beauty from my dad and my attitude from my mom. And with the two combined, you get an unstoppable bitch.

Golden quote, I think. I also tell him the truth, that horoscopes are one of the daily topics of conversation at ELLE. I know the zodiac signs of all my colleagues.

“A cool way to trigger a lot of middle-aged men”

A year ago, Bretman Rock made history in a corset and bunny ears when he became the first openly gay man to grace the cover of Playboy.

– I don’t want to sound like a scratchy record, but it was really something I felt I manifested. My manager and I made a dream board and I said I wanted to be a sex icon. “When you see the playboy bunny, you think of six… icons,” he adds, laughing.

– Two years later, I met the casting manager at Playboy while I was standing in line waiting for sushi. Two months later I got the offer for the cover. It was a cool way to trigger a lot of middle-aged men.

I feel like gen z thinks you’re cool while older people like your haters are always trying to brand you or put a label on you. How do you handle it?

Do you see yourself as a role model?

– I hope people look at me and see how far it can take you if you are yourself. Sometimes I’m probably a little too much of myself, I think. But I hope that children will see me as a poc island kid who really has no damn reason to be in Sweden and make commercials and jingles. But I’m here because I believed in myself, have been myself in all my content and in everything I do. I hope that’s what they take away from me. But much less swearing.

Do you ever struggle with your self-esteem or anxiety?

– Self-esteem… I have. A lot of self-esteem. Anxiety. Yes. I think a lot of people don’t realize that. I don’t show it that much. Especially in situations like this. But I have a lot of social anxiety sometimes. It takes me a moment to collect myself. Especially if I’m at home or running errands. I have to think for 20 minutes before I go to Target.

What is it that worries you? Is it meeting people because they know who you are, or what triggers it?

– I think it’s the pressure of never wanting to sound like I don’t appreciate what I do. But sometimes I think people expect me to always be on. Like Bretman Rock. I can’t be at Target checking out deodorants and be all “aha biatch”. I just want to grab my deodorant and go. I think it’s in my head, as most anxiety does. It’s never people’s fault to be honest.

What do you do to calm yourself down? How do you get over it?

– I take my cousin with me wherever I go. Just bring someone along. Someone who understands me. And she knows everything I’m thinking before I do. She knows my schedule by heart. Having someone there who feels familiar helps a lot. I like to be alone but not alone.

You can’t meet Bretman Rock without discussing clothing style and fashion. One day he jumps rope in a Rocky Balboa outfit in the garage and the next day he has borrowed the same Roberto Cavalli dress for the gala that Aaliyah wore in 2000.

How would you describe your style yourself?

– I think, first of all, that everyone’s style should be based on their mood. Second, my style has always been nonbinary, before I even heard of what nonbinary was. I think that’s the gift of being poor. I had no choice but to wear women’s jeans because they were on sale. And to be honest, they are cuter. I loved looking through my mom’s clothes, rather than dad’s boring clothes. Women’s clothing will always be better than men’s clothing. So why not wear them? I have always been all pronouns. In my language we don’t really have he or she. That’s how clothes should always be. Fuck labels, girl.

– I feel that everyone should dress more in Scandinavian fashion. It’s so cute. Not only does it look like a movie shoot, the people look like they are part of the movie. I feel like I’m in a movie here.

Beauty is a big part of your brand. You know a lot and I really feel like I’m meeting a person of beauty today. How important is beauty and what does beauty mean to you in your life?

– Every time I think of beauty, I think of my grandmother. She took the church a little too seriously, I think. Many foreign grandmothers get ready for church like they get ready for the Met Gala. I have adhd and my dad used to always make me do puzzles before church. But he didn’t understand that if you let me do the same puzzle every Sunday, I will learn to do it quickly. So I finished the puzzle and used to run to my grandmother’s room where she was getting ready. I used to sit exactly as I do now.

Throughout the interview, I have been thinking about how elegantly Bretman sits. It looks like he grew up on a divan. The heels with a high platform rest as if on the front of the shoe and he sits as if he were to be painted, alternatively was a living mermaid, but with more volume in his hair.

– I always wanted to wear her perfume and stockings. I think it was the first time I fell in love with the woman and beauty. And the art of tidying up and pampering yourself. I feel like it’s so underrated. My favorite part of the day is getting ready. It’s an excuse to stare at myself for two hours.

What is your go-to look?

– Athleisure, volume in the hair and lots of sun protection. I’m in my sunscreen era right now. I’m obsessed with testing and wearing sunscreen on my face.

Your hair is always incredible. The volume! Do you have a secret you can reveal?

– My secret is to be a lion, seriously. I was born with a man!

– Yes, I’m sorry. You had between July and August to give birth and you chose not to. So take the consequences. I’m sorry you’re an Aquarian with flat hair. I’m just kidding!

Lucky for you I’m not Aquarius, I say. He would only know how close it was. I am a fish, the sign after Aquarius. After Bretman gives me advice on how to take selfies, we say goodbye. I get a hug and an aloha. When I step out into the September sun, I feel his confidence rub off. I will never again think that I am ugly in a picture.