Real: It has 780 million euros available in case of expulsion from the Champions League!

This will be the future of electric BMW M

by HAVANNEWS
in Travel
Reading Time: 4 mins read
A A
0
0
SHARES
3
VIEWS
Share on FacebookShare on Twitter
ADVERTISEMENT

After Instagram model Sumner Stroh publicly accused Levin of having an affair shortly before he announced his wife Behati Prinslow’s second pregnancy, more and more girls are posting snaps of their conversations with Levine. singer.

This time, a comedian named Marika posted a series of her conversations with the singer. In the first clip, Levin is seen texting her saying, “I shouldn’t be talking to you, you know that,” to which she replies, “Yeah, but if we’re talking on a friendly level, why shouldn’t that be right?” In fact, he seems to have sent her a video, in which he tells her “I’m stupid”, without making clear the reasons why he promoted this material to her.

Another girl, Alison Roseff, was also quick to publicly share her private messages with Adam Levine, in which when the girl declared herself a fan of metal music, the singer replied: “There are no girls hotter than you.” Later in the conversation, Roseff told him “I’m very weird” and the Maroon 5 frontman told her “That’s what I like.”

Roseff, as she pointed out, made the decision to publish this material because she feels very bad for Levine’s wife, Behati Prinslow, and wants to encourage other girls to do the same. 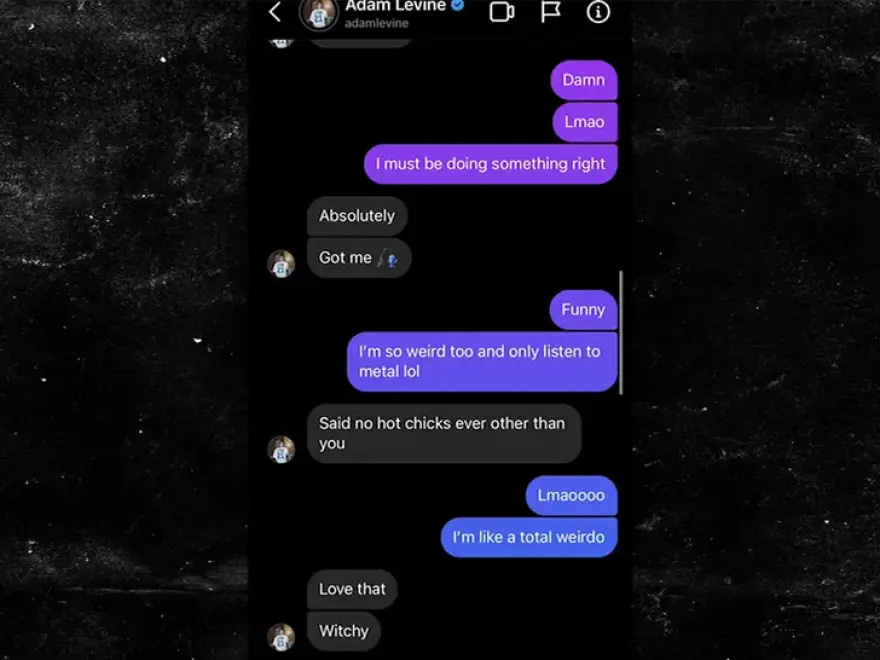 An Instagram model named Sumner Stroh claims she had an affair with Maroon 5 frontman Adam Levine. Although he has been married to supermodel Behati Prinsloo for eight years, in a TikTok video Summer revealed their “illegal” relationship and even leaked snapshots of their conversations.

As he claims, their relationship began shortly before he announced his wife’s second pregnancy. “Basically, I was in a relationship with a man who is married to a Victoria’s Secret supermodel. At that time I was young and naive. I feel like I was being taken advantage of. I wasn’t in the limelight like I am now, so I was definitely more easily manipulated,” he is heard saying.

In the messages they exchanged on Instagram and revealed by the woman, Levine wrote to her: “It’s unreal how hot you are. It blows my mind. You’re 50 times hotter in person.”

According to the girl, she and Levin dated for about a year, until within a few months, they ended their relationship. Shortly after their separation, this year, the 43-year-old musician announced his wife’s second pregnancy with a… strange message. Specifically, he wrote to her: “Okay, serious question. I’m expecting another baby and if it’s a boy I really want to name him Sumner. Are you okay with that?’

As the model says in the video she published, the message in question made her feel very strange, as if she was “in hell”. “Suddenly I felt like my morality was at stake. I realized that he had been manipulating me for so long,” she says.

He explained that he never planned to deal with such a situation and especially, publicly like now and knew the consequences of “engaging with a story like this”.

“I wanted to handle it privately. I’ve never wanted to come forward because I obviously know the consequences of what I’m doing. I had recklessly sent some screenshots to some friends I thought I trusted, and one of them had tried to sell them to a tabloid… So there you go,” he says.

While Stroh didn’t specify when exactly their relationship began and ended, her allegations came just five days after Levin’s wife confirmed her pregnancy in an Instagram post.

The frontman of Maroon 5 gave his answer to what the model, Sumner Stroh, claims the other day.

Through Instagram stories, Levin denies that he had a relationship with Stroh, but admits that he “crossed the line”:

“A lot is being said about me now and I want to be clear. I made the mistake of speaking to anyone other than my wife in a flirtatious way. I wasn’t in a relationship, however, I crossed the line during a sad time in my life. In some cases it became inappropriate. I admit it and have taken steps to heal it with my family. My wife and family are what I care about most in the world. Being naive and stupid enough to risk the only thing I really care about is the biggest mistake I’ve ever made. I’m not going to do it again. Take all responsibility. We shall Overcome. And we will get through it together,” he wrote.

For even more news from Patras, Greece and the World, the moment it happens, enter the news feed of pelop.gr

Real: It has 780 million euros available in case of expulsion from the Champions League!

This will be the future of electric BMW M

UEFA Champions League | The show returns to the “table of the rich”! Inter puts FC Barcelona in the corner, Napoli “crushes” Ajax, and Liverpool delights its fans at Anfield