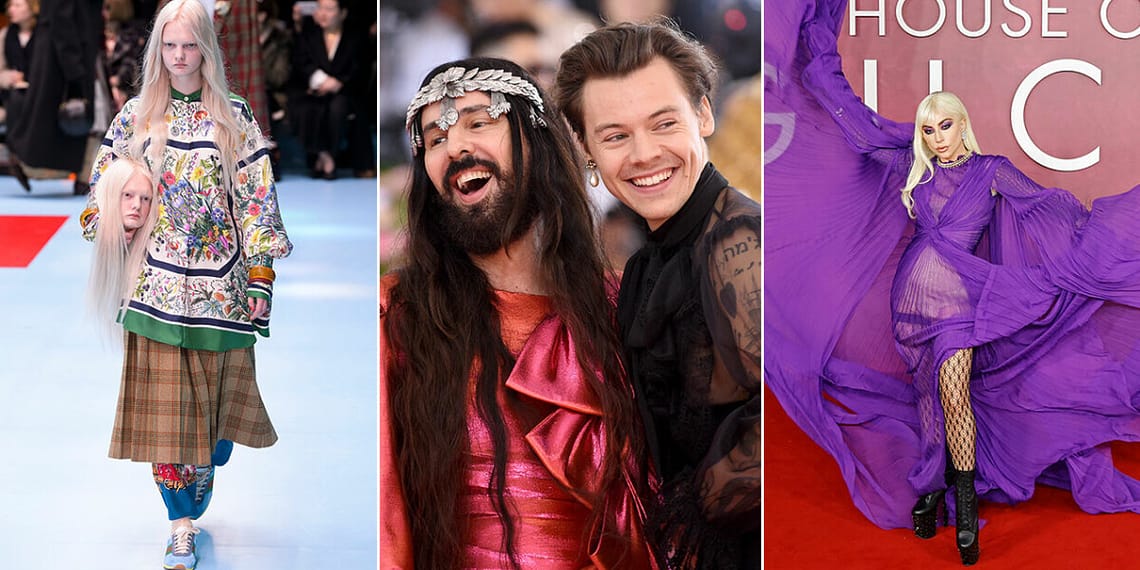 by HAVANNEWS
in Entertainment
Reading Time: 9 mins read
A A
0
0
SHARES
0
VIEWS
Share on FacebookShare on Twitter

From talked-about shows to twin-themed times two and one of the biggest IT shoes of all time – here are five big talking points from Alessandro Michele’s time at Gucci.

After about a day of speculation, the statement came on Wednesday evening that Alessandro Michele is stepping down as creative director of Gucci. The news is in many ways the end of a historic era for the Italian fashion house.

“There are times when paths diverge because of people’s different perspectives. Today ends an extraordinary journey for me, which lasted more than twenty years, within a company to which I have tirelessly given all my love and creative passion”, says the fashion designer himself in a comment and continues:

“During this long period, Gucci has been my home, my second family. Together with them I have wished, dreamed, fantasized. Without them, none of what I have built would have been possible”.

Alessandro Michele has worked at Gucci since 2002 and has been creative director since 2015. And it is a completely different Gucci than the one he once started. Right after he took over Gucci’s creative reins, he breathed life into new winds that changed both the fashion house and the entire fashion industry at large.

Regardless of how knowledgeable or not you are about the Italian fashion house, there are a series of events over the past seven years of Alessandro Michele’s career that we all probably remember a little extra. From viral views to one of the biggest IT shoes of all time – here are five moments that brought the world together on one and the same topic of conversation – Gucci.

It takes two, baby! The latest big talk of Alessandro Micheles x Gucci came when the fashion house presented the spring and summer collection for 2023. During the finale, the audience was shocked when a wall was suddenly raised next to the models on the catwalk. Back there, what appeared to be a completely identical display, with completely identical models, was going on.

The truth was that there were a total of 68 pairs of twins who went to the screening. Each twin styled exactly the same as their sibling. Alessandro Michele named the collection “Twinsburg”, which was inspired by his mother who is a twin.

The atmosphere was palpable during the screening, and tears flowed from several of the guests in the audience. Of course, the Internet was not slow to notice the show either.

The models who wore their own heads

We rewind the tape to another screening that had guests (and the internet) gagging. Gucci’s fall 2018 collection display was clearly the biggest talk of Milan week.

In the collection you could see everything from dragons, to Game of Thrones-characters and futuristic sci-fi references and the stage was set up like an operating theater with a surgeon’s table and strong operating lights. But the big talking point revolved around the models arriving carrying what appeared to be their own heads.

The internet went viral after Alessandro Michele’s screening and the comments shifted between “brilliant” and “disgusting”.

Alessandro Michele has dressed many celebrities in Gucci on the red carpet and one of the most frequent is Jared Leto. But during the 2022 Met Gala, they both stood together for perhaps the event’s most unexpected look. And once again, the twin theme is in focus, as the fashion designer and the actor arrived wearing identical Gucci outfits. The cream tweed suits had sequined, floral embroidery which was matched with a shimmering hair clip, sunglasses and a brown bag.

The slipper that suddenly appeared everywhere

For autumn and winter 2015/2016, Gucci launched “The Princetown slipper” – a new variation on the fashion house’s iconic loafers. It was during Alessandro Michele’s very first collection as creative director that he took the turns on the old classic.

In no time at all, the sandals with the famous “stirrup” became hugely popular and for a few seasons to come, they were seen in every other celebrity and street style photo and filled, well, really filled, our social media feeds. Thanks to its strong popularity, several different variations of the slipper have been released, season after season.

Alessandro Michele has collaborated closely with a number of well-known faces. And perhaps no other brand has worked as successfully with celebrities as Alessandro’s Gucci. His striking, playful and gender-crossing designs have attracted names such as Lady Gaga, Dakota Johnson, Billie Eilish, Rihanna – and of course Harry Styles, whose common interest in fashion has not escaped any fashionista out there. (This summer, the news came that they are even releasing a collection together!).

How entrepreneurs can eliminate the threat of bankruptcy: “Up to proof”